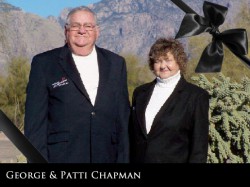 In 1943, George Chapman shot his first tournament. Little did he know how important archery would become to him? In the early 60’s, he started coaching, traveling to major tournaments and became one of the top professional archers in the country, winning many state, and sectional titles, and he introduced his wife Patti to archery in 1956. She also became a professional and won state and sectional titles.

They teamed up and put on exhibitions, schools and tournaments. They put on Lake of the Woods tournaments in Mahomet, Ill and the Desert Shoot-out in Tucson, Az. In 1971 George joined PSE and wore many hats there. He originated and ran the PSE dealer schools, shooter schools and the technical schools until his retirement at the end of 2005.

He continued to run his full fledged pro shop and doing tech schools, bowhunting schools and shooting schools. George, Patti and his two only Certified Instructors, Steve VanZile and Monte Maliongas traveled around the country doing tech schools and bowhunting schools for dealers, individuals and manufacturers. Patti passed away in 2009. George loved archery and everything about it and loved Patti even more. When she passed it left a giant void in George’s life and even archery could not come close to filling it. George, Steve and Monte continued to do schools right up until George passed away in 2010.

After George’s death his family approached Steve VanZile and Monte Maliongas with the prospect of continuing the schools. Steve and Monte knew what George would have wanted and in fact he had talked to them about it. Steve and Monte decided to honor their friend, mentor and passionate ambassador of archery by continuing to present the Chapman Archery Schools.

“We feel George would want us to continue in his footsteps through coaching, training and bringing the latest archery technology to archers, bowhunters and dealers. The schools will always be the “Chapman Archery Schools” . They were his idea and his devotion to archery made them what they are today, Monte and I are just the custodians of his Legacy. We realize that we cannot replace George Chapman, but we will strive to live up to the high standards he created for the schools that bear his name.”