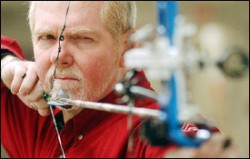 As an 11-year-old boy who first picked up a wooden bow and hit his first bullseye, Steve has never forgot the simple reason he took up the sport. It was fun. Steve will tell you, “I just like to see arrows fly. There is a mystique to it. To me, it’s like an art form.” What an art the sport of archery is.

For over five decades, this artist’s canvas has been quiet woods, radiant with fall colors, hunting trophy whitetail deer, or rugged terrain out West, in pursuit of antelope or elk. He has 16 Pope & Young trophies. He also knows the high-pressure world of competitive target shooting, toeing the line alone with his arrows and overcoming his anxieties to win many State and Sectional archery titles. He has finished 6th in the World Championships twice. It has been countless schools, scout meetings, seminars, trade shows, and one-on-one sessions where his aim was to hook newcomers into archery—or make veteran shooters better, passing on his knowledge as a highly sought national and state-certified coach. He has coached over a hundred shooters to State Championships, 8 National Championships and 4 World Championship titles.  He was featured in a Discovery Channel program on the evolution of weapons where he demonstrated the accuracy and effectiveness of the long bow, recurve bow and the modern compound bow. Steve was inducted into the New York State Archery Hall Of Fame in 2007.

For hunting, for competition, for pleasure, archery is a life sport to Steve. And, it has been a good life for him, as well. He met his wife on the archery range. “Archery is a sport where there is no height, weight, gender, or strength requirements. Everybody can enjoy it.” He said, “It has given me so much. All I want to do is just give some of that enjoyment back to people.”

Steve continues to coach,  hunt and shoot competitively along with presenting the George Chapman Technical Schools. He considers it a gift to be able to follow in George’s footsteps and presents the schools in George’s honor.